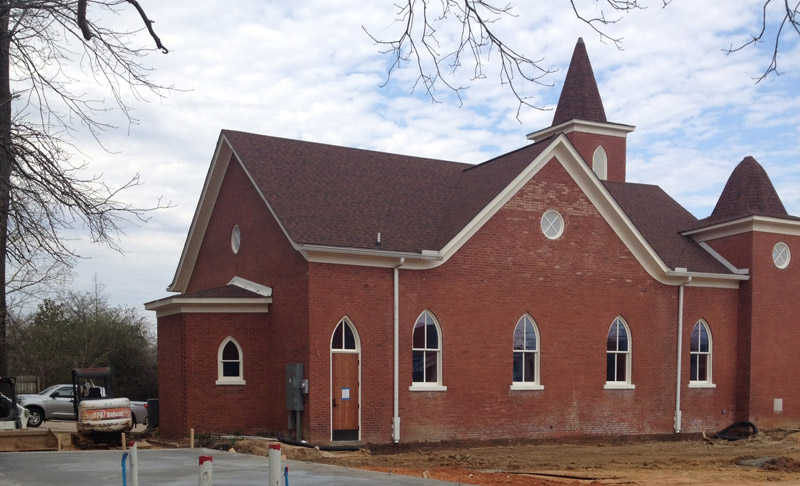 This past year a group of Oxford citizens and Ole Miss professors came together to form a Burns Belfry Interpretation Team to come up with a list of themes for the new Burns-Belfry Museum and Multicultural Center. The team also included members of the Burns United Methodist Church and members of the Oxford Development Association.

The team was formed in the same manner as the Interpretation Team that formulated the themes of L.Q.C. Lamar’s life for the exhibits in his renovated home on North 14th Street. These themes are what you see when you visit the Lamar’s home and we intend to have these exhibits ready when the Burns-Belfry Museum and Multicultural Center opens later this year.

The team came up with eight different themes to be used in the exhibits. They are as follows: Church--The church upheld African American families and communities including their activities, hopes and aspirations; Education--African Americans valued pursuing an education to ensure the rights and privileged of full citizenship; Labor--African Americans strove for greater economic security; Enslavement--Slavery perpetuated, emotional and sexual violence on African Americans while also diminishing the humanity of white people.

Other Themes are: Emancipation--Enslaved African Americans sought to free themselves long before Lincoln issued the Emancipation Proclamation, and afterwards they exerted self-determination to realize their full citizenship, despite obstacles and roadblocks; Jim Crow--Custom and law controlled the lives of African Americans during the long era of Jim Crow; Migration--For many African Americans who migrated to other places seeking educational and economic opportunities, family ties often provided a safe haven; and Civil Rights Movement--Through challenging the denial of their freedoms in both active and covert ways during the Civil Rights Movement, African American made gains towards equal rights.

The Mission Statement of the Center is, “The Burns-Belfry Museum and Multicultural Center exists for the purposed of building community by bringing people together to fulfill the dreams and aspirations of unsung heroes who have worked to provide opportunities for advancement to all in the community.”

The Vision of the Center is, “The Center will serve as home for the Oxford Development Association in partnership with The Oxford Lafayette County Heritage Foundation. Through its educational/cultural programming and historical collections, the Center will provided practical opportunities to build community through dialogue and implementation of the Mission. It is committed to fulfilling the dreams and aspirations of many who have worked tirelessly to provides resources for advancement to all in this community.”

In an effort to produced new research on American History through experiences of African Americans in Lafayette County, Ole Miss History Professor Dr. Elizabeth Payne, who was a member of the Interpretation Team, formulated a course, on the 400 level, mainly for History and Southern Culture majors this semester. She asked me if I would meet with the class as a “community mentor” to help direct the students toward topics for their thirty-five page research paper due at the end of the semester.

The course fulfills the research component prescribed by the American Historical Association for a major in History. By producing a piece of original research, students will gain an appreciation for how scholars in history craft the writing of history. The topics will relate to the local history of African Americans in the Oxford and Lafayette County area. Topics include, for example, Freedmen’s Town, The Burns United Methodist Church, the Rosenwald School, the history of an African American cemetery, Second Baptist Church or local African American citizens would were leaders in the community.

Dr. Payne related to me, “This course in local history is designed to create new knowledge through students’ working with the community. I would appreciate help from Oxford and Lafayette County residents should one of our students contact you.”

This course and project will added to the data that the Oxford Development Association, the Burns United Methodist Church, and The Oxford Lafayette County Heritage Foundation will be able to provide to our community when the Burns-Belfry Museum and Multicultural Center opens its doors later this year. 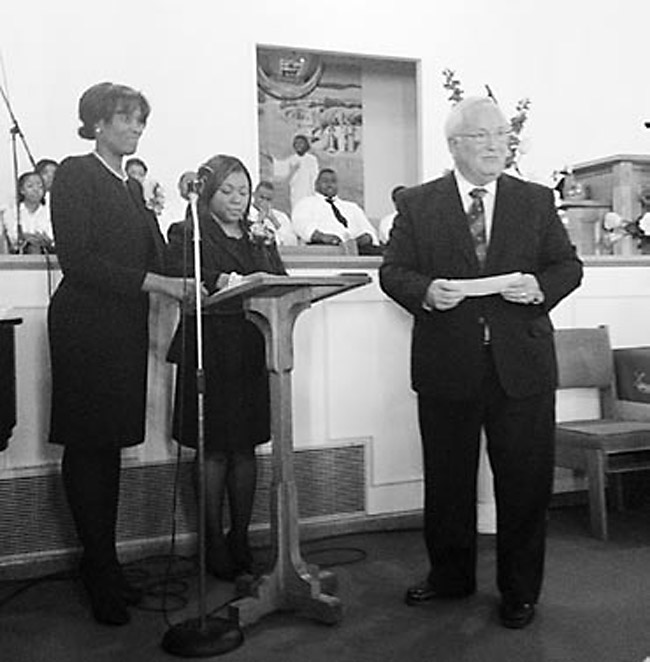 At their recent annual Founder’s Day Celebration, the members of the Alpha Kappa Alpha sorority presented a $1,000 donation for the Burns-Belfry Museum and Multi-Cultural Center Project to Jim Pryor. Presenting the check were Angela Stringer and Timbrely Hines. 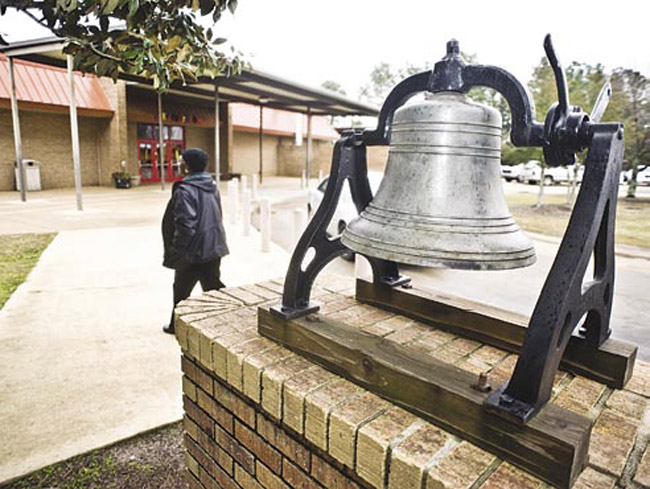 Burns Belfry gets bell back

After more than 40 years, bell to be returned to church

A bell with more than 40 years of tradition of being outside Oxford Elementary School will soon return home to its rightful owner — Burns Belfry Church.

The Oxford School Board agreed to return the bell. Originally it stood at the former elementary school where the federal building on Jackson Avenue now stands, Superintendent Brian Harvey said.

“But it was confirmed by Queenie Barnes that the bell actually came from Burns Church and they have asked for it back,” Harvey said. “They have been loaning it to us for more than 30 years.”

Jim Pryor, renovation coordinator for the Burns Belfry Church, said the church was sold in the early 1970s and the bell was donated at that time.

“It’s a neat thing that we can somehow bring back with the kids,” Pryor said. “I’d like for it to be an opportunity for the kids at the school.”

The church is being transformed into a museum to celebrate the local African-American community. The renovation efforts are in phase three of a four-phase project. Landscaping around the historic structure on Jackson Avenue is expected to be complete in July.

Hooker Construction will then reinstall the bell into the church tower. The museum work and inside of the auxiliary building will be part of phase four in the project. About $200,000 more in funds needs to be raised to complete the project. A digital museum will also be used to host events. For more information visit www.burns-belfry.com.

Burns-Belfry set to open in June

Phase 3 of renovations to begin soon

With funding in place, Phase 3 of the Burns-Belfry Museum and Multicultural Center renovations is about to begin and, after about a decade of planning, fundraising and construction, the historic church could be open to the public as early as June.

Jim Pryor with the Oxford-Lafayette County Heritage Foundation present- ed the Oxford Board of Aldermen with a donation of $84,704 on Tuesday from the society’s fundraising efforts toward the renovations of the old church that was once owned by best- selling author John Grisham.

Pryor told the board the estimated cost of the final phase of renovations, which will complete the interior of the church, is $308,000. A parson- age-storage building will also be constructed. It will contain storage and office space.

“It will just be the building,” Pryor said.

“We will complete the inside later on.”

When the museum is complete, the cost of renovations will be nearly $1.5 million.

Built in 1910 as Burns Methodist Episcopal Church, it stands on the site where former slaves first built their own house of worship, Sewell Methodist Church, after the Civil War in 1869.

The building was converted to office space after the Burns Methodist Episcopal Church moved to Molly Barr Road. Best-selling author John Grisham purchased the building in 1993 to use as his Oxford office, but he donated it to the Oxford Lafayette Heritage Foundation in 2002.

The renovations have been funded through state and federal grants, including a $500,000 grant from the U.S. Department of Housing and Urban Development and donations from the city of Oxford and Lafayette County, as well as private donations.

Pryor said all of the money given to the board Tuesday was raised through private donations.

“As you can see, the windows and doors are all in,” he said. “When Phase 3 is complete we will be ready to open.”

The board approved accepting a bid from Hooker Construction of Thaxton to complete Phase 3.

Pryor said the museum is plans to open in June and will have wall materials and a vignette on the history of the building and the second portion, which is computer kiosks, will have oral histories and information about the African-American community.
To learn more about the building, visit www.burns-belfry.com.

The Burns-Belfry Museum and Multicultural Center is still being constructed as part of the nearly $1.5 million restoration of the historic Burns Methodist Episcopal Church.

However, the supporters of the facility that will be dedicated to African-American history are already hosting a series of programs to mark the 150th anniversary of the Emancipation Proclamation.

The first talk was held Thursday and focused on the legal basis of slavery in American history. Anne Twitty, assistant professor of history at the University of Mississippi, was the guest speaker at the event held at the Oxford Middle School cafeteria.

Twitty discussed the difference between statutory and customary law and how the Dred Scott V. Sanford case of 1857 was one of the most infamous decisions in American case law.

“Slaves and freed blacks were stripped of their rights,” Twitty said. “It was a world years in the making, a legal fiction that a human being could in fact be a thing.”

Twitty noted how statutory law began to take over in America but before the case customary law was important in early America.

The next event, a talk on “Slavery in Mississippi” by UM professor Deirdre Cooper-Owens, will be held Oct. 25 at OMS at 5:30 p.m., and the third event will take place in January.

Despite the proclamation being signed in September of 1862, museum organizers wanted to hold the third celebration in January to honor when it took effect, Jan. 1, 1863.

While programming has begun as part of the museum’s multicultural center component, more work continues on the building itself on Jackson Avenue.

The Oxford-Lafayette County Heritage Foundation and Oxford Development Association partnered together more than 10 years ago to rebuild the building after John Grisham donated the space to preserve African-American history of the community.

The project is now nearing the last few months of work as Phase 2 is set to be complete within the next couple of weeks.

“We are waiting on windows and doors to come in,” OLCHF President Jim Pryor said. “Once they are in, they have to install them.”

After some other minor work, such as sidewalk paving, the third and final phase will begin, which includes a parking lot, green space and a storage and office building.

The museum is planned to open mid-year 2013 in two phases, including wall materials and a vignette on the history of the building and the second portion, which is computer kiosks, will have oral histories and information from the African-American community.

Cynthia Parham, president of ODA, said that the joint venture is something everyone can be proud of in the community.

Darlene Copp is organizing museum materials and the 150th anniversary events. She welcomed the community to the program and asked for interested volunteers to participate in planning the January events.

For more information, contact Copp at 513-9957 or dpcopp@oxfordmsheritage.com. To learn more about the building, visit www.burns-belfry.com.

Please join us in observing the 150th anniversary year of Emancipation.

Three presentations on American slavery will begin at 6:00 p.m. in the newly restored and renovated Burns-Belfry.

VOLUNTEER FOR BURNS-BELFRY PROJECTS
If you are interested in volunteering to support Burns-Belfry programs and operations in 2013, get on our list and we'll contact you as needs arise throughout the year.