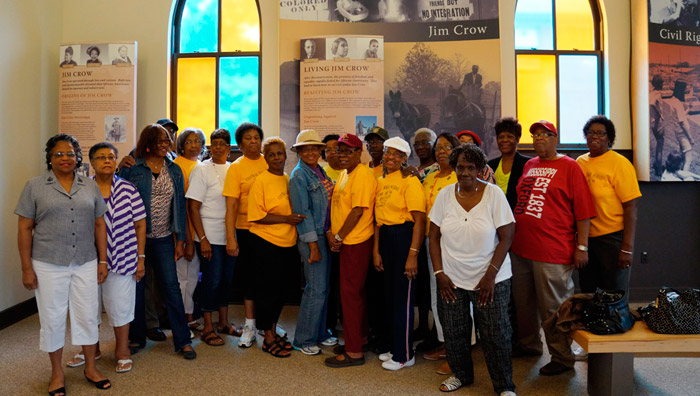 For the 50th anniversary of their graduation, the Central High School class of 1964 planned a visit to the Burns-Belfry Museum on Saturday, July 19, 2014. Their visit followed a historic tour of Oxford on the double decker bus. Julia Thompson, museum volunteer, greeted the group of 20 and oriented them to the three exhibit areas.

To see more images of the reunion visit, see the Gallery. 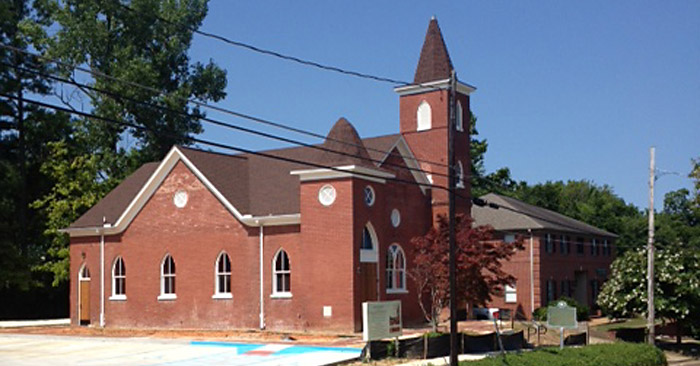 For generations, Burns-Belfry served Oxford’s African-American community as a place of worship. Now, the historic building is on the verge of beginning its second century as a museum and gathering place for all of Oxford.

Thanks to generous public and private support, the third phase of construction is concluding at the church, the first house of worship built in Oxford by freed African Americans. The first phases saved the structure, renovated the exterior, and roughed out the basic interior. Now, with the interior and landscaping being finished and the initial phase of the museum being installed, the project is on track to open to the public on September 21.

The project was undertaken by the Oxford-Lafayette County Heritage Foundation, with assistance from the Oxford Development Association.

The Heritage Foundation is seeking funds to complete the museum and to finish a storage building on the rear of the lot that mimics the church’s former parsonage.

“To date, structural integrity of the church has been restored and the exterior and interior are now being completed,” said Jim Pryor, a retired corporate executive who is managing the renovation for the Heritage Foundation. “Phase Three tackles the finer details of the exterior and interior. Now our focus is on landscaping, museum exhibits, and opening the meeting center.”

While the building will be washed with bright light from the colored glass windows, it will be able to be darkened for meetings and other presentations. A modern and fully functional conference space is planned, with a drop-down video screen and full audio-visual capabilities.

And no church – certainly no belfry – would be complete without a bell. The original church bell, believed lost for years, was recently determined to be the same one on display outside of Oxford Elementary School. The Oxford School Board recently approved the return of the bell and it has been installed to its original place in the bell tower.

“Grants from local, state and federal governments have been generous and instrumental in getting within sight of completing the Burns-Belfry project,” Pryor said. “With continuing support from the Oxford-Lafayette County community by way of donations from individuals, small businesses and corporations, we can complete the restoration, fund the exhibit, and establish an endowment.”

One of those individual donors happened by Burns-Belfry on a bicycle. Ray Neilsen, former Chairman of the Board of Ameristar Casinos and current chairman of the Craig H. Neilsen Foundation, fell in love with Oxford when his two oldest sons attended the University of Mississippi. While both have graduated, he still maintains a residence and spends time in Oxford.

While riding Oxford’s recreation paths on his mountain bike, Neilsen noticed the boarded-up façade of Burns-Belfry, then in its first phase of restoration. “I had ridden by the site,” Neilsen said, “and noticed the building was there – and what a spectacular building it was.”

After talking with Pryor and others involved in the restoration, Neilsen committed to supporting the project. To date, he has donated $220,000 - $90,000 for the building and site work and $130,000 for the museum.

“As a student of history, I believe Burns-Belfry is a unique piece of Oxford’s history that deserves to be preserved,” Neilsen said.

Neilsen also plans to put time and energy into the project including personally helping with the landscaping. “My passion is landscaping. It’s something that I really enjoy doing,” he said.

Pryor said that the latest phase would not be under way without Neilsen’s support. “We are deeply grateful for his contributions to the project,” Pryor said.

Built in 1910 to replace the original 1867 wooden structure, the Methodist Episcopal Church at Oxford was Oxford’s first church built by freed African Americans. The brick structure on Jackson Avenue has since served both the religious and secular communities. The project started in 2002 with the donation of the building and land to the Heritage Foundation by the author John Grisham, who had used the building as an office. A decade of planning, fund-raising and construction followed. Funding for the project has come from a U.S. Department of the Interior “Save America’s Treasures” grant; Mississippi Community Heritage Preservation grants; a U.S. Housing and Urban Development grant; matching funds from the City of Oxford and Lafayette County; and individual donations. 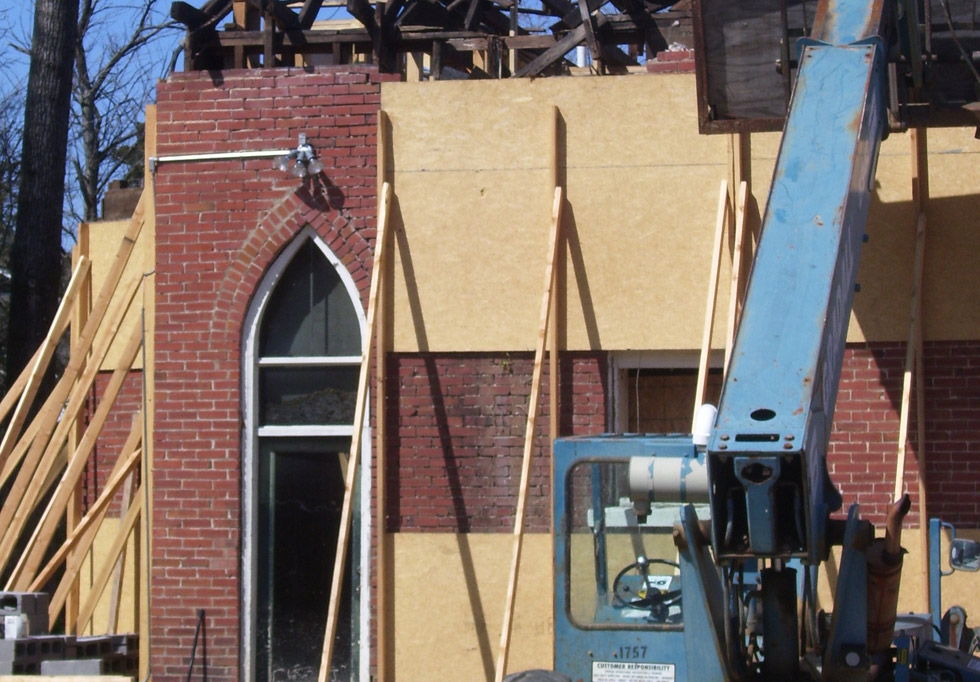 In April 2012, The Johanna Favrot Preservation Fund, administered by the National Trust for Historic Preservation, awarded the Oxford-Lafayette County Heritage Foundation a $2,500 educational programming grant applied for in early 2012. A donation from the recently dissolved Oxford-Lafayette Preservation Alliance will cover most of the required dollar-for-dollar match. In expressing special appreciation for the Burns-Belfry project, the Favrot family added an additional $1,000, which does not require matching.

The grant is covering design and build of the Burns-Belfry website, a valuable outreach tool as we work to establish the historic site as a vital part of the Oxford-Lafayette community. The website will also facilitate raising funds to complete the restoration, create exhibits, and build an endowment. We expect www.burns-belfry.com to be up and running in early October 2012.

The website will feature inaugural programming sponsored by the Burns-Belfry Museum and Multicultural Center in observance of the 150th anniversary of Emancipation. Postcard and poster promotions for the events are also covered by the Favrot grant. First up are presentations by University of Mississippi History professors on American slavery. On Thursday, October 11, 2012 Dr. Anne Twitty will discuss “The Legal Basis of American Slavery,” followed by Dr. Deirdre Cooper Owens presenting “Slavery and Mississippi” on Thursday, October 25, 2012. Both programs will take place in the Oxford Middle School cafetorium in Freedmen Town starting at 5:30.

An Emancipation Anniversary committee including Professors Twitty and Cooper Owens will meet this fall to plan activities for January 2013 that will involve all ages. If possible, they will take place at the Burns-Belfry. We welcome anyone interested in making this a community-wide event to be a part of the planning. Please contact Darlene Copp at 662/513-9957 or dpcopp@oxfordmsheritage.com to get involved.

In September 2012, the Lafayette Oxford Foundation for Tomorrow (LOFT) awarded the Burns-Belfry a $2,000 grant for two illuminated speaker podiums with built-in amplifiers. These furnishings will be essential to the success of programs presented in the restored Burns-Belfry building. 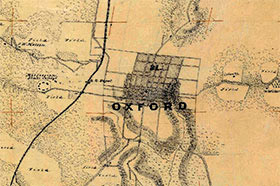 The Historic Maps Project involves the digitization, rectification and digital display of historic maps using online software. The maps date from 1835 to present day and are fully interactive. 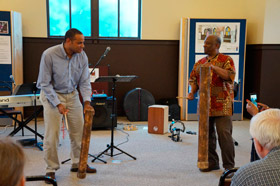 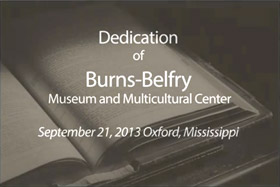 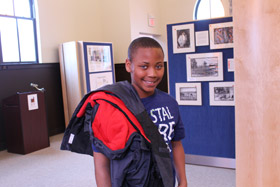 RENT THE BURNS-BELFRY FOR YOUR SPECIAL EVENT

Looking for a special place for your wedding reception, anniversary celebration, birthday party, or other special event?

VOLUNTEER TO WORK AT THE BURNS-BELFRY MUSEUM.